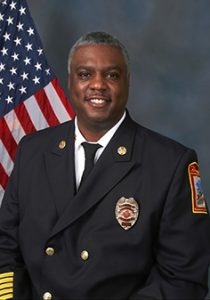 Cory D. Moon is the Fire Chief for the City of Birmingham, Alabama. Chief Moon leads the largest Fire Department in the State of Alabama, commanding approximately 700 personnel and 32 Fire Stations with an annual operating budget of $78,047,111. BFRS responds to over 74,000 emergency incidents annually. He is ultimately responsible for providing fire suppression, emergency medical, special operations, public education and fire prevention services to over 211,000 citizens.

Chief Moon joined the Birmingham Fire and Rescue Service on March 26, 2001 where he rose through the ranks. In a 7-year period, he went from Firefighter / EMT to Fire Chief which is the fastest rise through the ranks in the modern history of Birmingham Fire & Rescue Service. He has served the department as a Firefighter / EMT, Lieutenant (promoted 2012), Captain (promoted 2015), Battalion Chief (promoted 2017), and now as the Fire Chief (appointed by the Honorable Mayor Randall L. Woodfin October 2019). In these leadership roles, he has served as the Chief of Training and Safety, Battalion Chief in Operations, Department Safety Officer, Technical Rescue Team Leader, and Recruit School Instructor. Chief Moon has always been well respected by both Firefighters and Officers of the department and has become known for his balanced demeanor and mediation of issues.

Chief Moon is a native of Birmingham, AL. He has been happily married to Lieutenant Charnessa R. Moon since 12/12/12. This union has produced two beautiful daughters: Brooklyn R. Moon & Cali R. Moon.

Some of the many accomplishments under the leadership of Fire Chief Moon include:

Some of the accomplishments from 2020 include:

Some of the accomplishments from 2021 include:

Some of the accomplishments from 2022 include: